When introducing a new power system component, e.g. a converter substation or a contact line system, electrical system compatibility must be ensured. According to the European standard NEK EN 50388:2012, this is a new element in the rail system and a compatibility study has to be carried out regarding harmonics and dynamic effects.

The overall intention of the process is to ensure compatibility between the new element and the existing and planned future infrastructure and rolling stock. The present document aims to very briefly and generically describe the existing infrastructure, rolling stock and operation conditions in the system together with the acceptance criteria for the new element. That is step 2-7 in the float diagram for the compatibility check in NEK EN 50388:2012 Figure 2. As a guideline, the description for each step is repeated for the corresponding chapter in this document.

The plan for a specific compatibility check when introducing a new element in an existing railway system defines the scope of the analysis, and the precise tasks and responsibilities. The plan shall be agreed between all involved parties. This includes nomination of the organization in charge of the compatibility study.

1.1 Scope of the analysis

The scope of the work is the introduction of the new element in the power system. The amount of work to be done depends on the risk of the integration of this new element:

EN50388:2005 explicitly describes compatibility with existing rail system. In order to be prepared for future, the study to be performed shall also include information about future as far as it is known.

The involved bodies or parties with the corresponding roles in the process are as described in the table below.

The organisation in charge of the compatibility study is: To be decided by the project

If nothing else is decided, each body has the responsibility for the corresponding steps in the compatibility process as described in EN 50388:2012 Table 6.

As a part of the plan for the compatibility check a rough time schedule shall be made in order to coordinate the different activities.

Generic information about the Norwegian electrical infrastructure and existing rolling stock according to the ESC (electrical system compatibility) data base is given in JBV document Supplementary information and regulations#Onboard power supply and control systems Appendix d. A summary of this information according to EN 50388:2012 table D.1 is given below and the following sections.

Notes to the table: 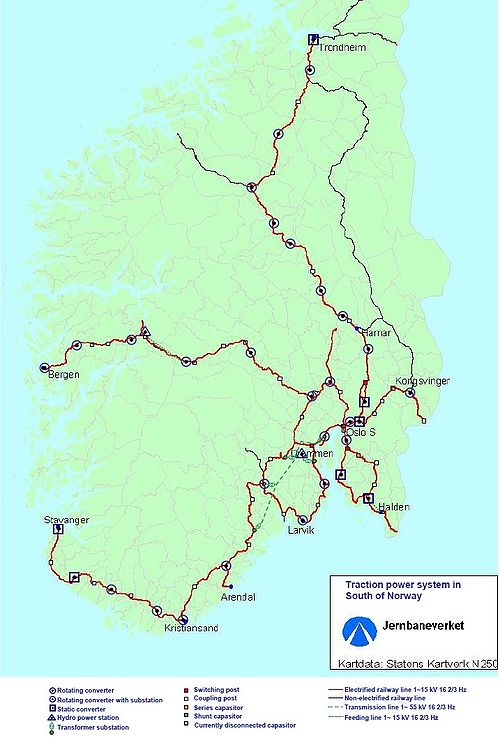 At present there is directly feeding into the overhead contact line network:

Each substation is equipped with 1 to 3, with 2 as typical, number for units. Future plan is to collect more converter units in less converter stations resulting in a longer distance between them, which can be possible due to an autotransformer system (see below).

All the existing static converters have DC link filters, which aim to reduce the DC link voltage ripple. All of the converter DC links have the following DC link components:

Some converters also have filters with the following tuned frequencies:

The following transmission systems exist or are planned:

Generic parameters for feeding sections are given below.

The numbers for capacitance in the table are not calculated for the Norwegian systems specifically, but taken from the generic numbers in TS503238-2:2010 Annex B.

The influence of the cable position has been checked for the variants, where the whole cable is concentrated in the middle of the line, concentrated on one line end or distributed evenly along the line. It turns out that the position and splitting of the cable has no effect on the damping and frequency of the lowest resonance. The differences show at higher frequencies, but no additional resonances occur. Only the total length of the cables is relevant for the frequency range up to 500 Hz.

Coupling posts normally exist between power substations having more than 50 km distance in between.

Switching post exists on some junctions where three or more lines meet, but not all.

From former times, series and shunt capacitors were used for improving the overhead contact line voltage level. Some of the series capacitors of -7.35 Ohm at fundamental frequency are still in operation. The only shunt capacitor of 4 MVAr at Oslo S is currently disconnected.

At unenergised and floating sections a train shall decrease its traction power to zero and disconnect the main circuit breaker before passing.

Train depots where several trains may be parked at low load with pulsing converters exist at several places. A general rule may be that the larger the city is the more trains may be parked. Several larger depots in the Inter City area around Oslo are planned.

Figur 2 shows an estimation of the number of 110 m vehicle units for different planned depots i the network versus the estimated maximum corresponding 15-kV source impedance during reduced feeding situation. Reduced feeding by disconnecting lines is regularly done in order to maintain the railway lines when low or no traffic.

Further compatilbility considerations and power supply mitigations may be necessary if depots having high input admittance is planned depending on actual vehicle characteristics. 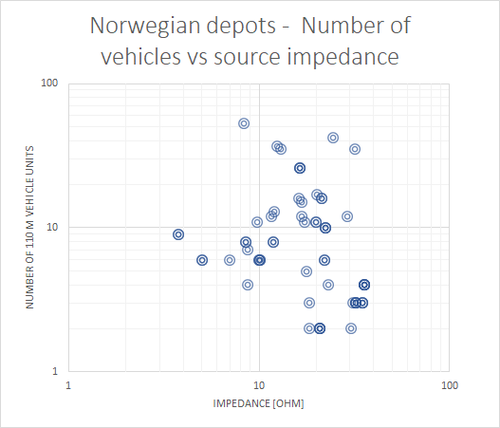 Figur 2: Estimation of number of vehicles versus source impedance for planned depots

The following experiences have been made regarding the existing and planned infrastructure: 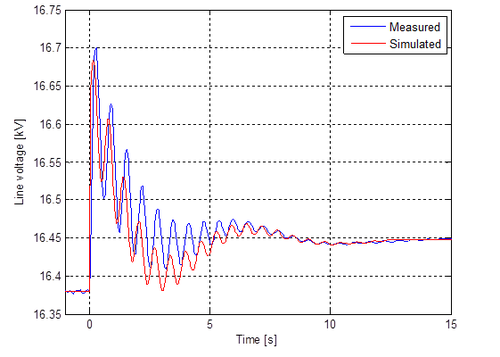 Figur 3: Step response to a load rejection of a Q38 rotary converter. 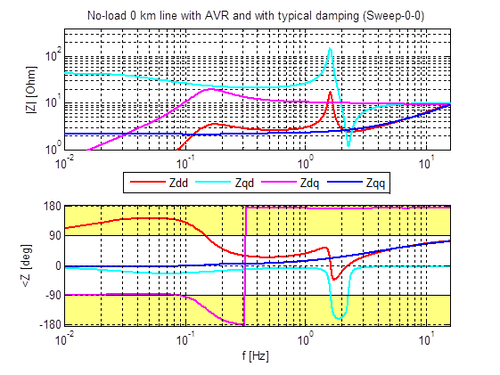 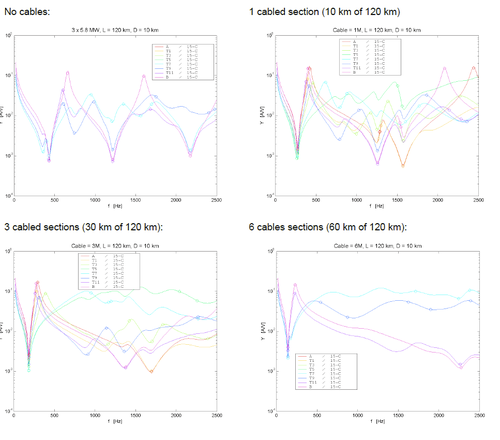 Figur 5: Network admittance at different shares of cables in AT system.

The following vehicles has today acceptance for traffic in the Norwegian national rail network. Passive filters refer to HV-filters or filters on a separate winding of the transformer, not filters on the DC-link in case of an inverter vehicle. Vehicles may in addition have capacitive cables on the roof. Active behaviour refers to if the control system compensates for harmonics in the traction current in order to draw a sinusoidal current.

Number of vehicles in operations is given for the total amount in Norway and Sweden. It does not necessarily mean that all vehicles are operating at the same place and time.

Multiple operation refers to the numbers of vehicles that can be operated together given by number for normal operation and number for special situation in brackets. This is valid for Norway only.

All inverter vehicles may use regenerative braking and are able to control reactive power consumption and production independently of the active power.

EN 50388:2012 table D.3 describes the different types of traction units generically, mainly in terms of impedances, conducted interference harmonics and stability from the point of view of the traction power supply.

However the following experiences have been made regarding the existing rolling stock in the system: 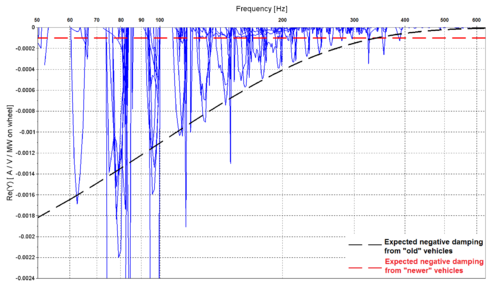 Figur 6: Expected negative damping from measurement on existing vehicles and generalisation and categorisation.

Future vehicles are declared compatible with the electrical infrastructure and existing rolling stock according to the national Norwegian rules for rail vehicles published by Norwegian Rail Authority together with the Supplementary information and regulations.

Abnormal feeding arrangements are covered by the worst figures (respective min and max values) in Table 1. That is emergency feeding

This is the combination of the information from steps 2, 3 and 4. It may be necessary to define different scenarios.

The rail system is characterised by:

6.2 Needed characteristics of the new element

Based on this, the requirements for the new element must as far as possible being passive or damping for any oscillations in order to be compatible with existing infrastructure and rolling stock under the given operation situations. Furthermore, the new element should not lower the already low electrical resonances in the system.

In general, the design of active converters and their control must be robust and generic. The needed operating conditions are:

The following specific requirements have been generally identified:

Note that other or more specific acceptance criteria may have to be developed for the specific case depending on the new elements intended use and applied technology and technical solutions. For example, additional requirements valid for converter stations are given in Banestrømforsyning/Prosjektering og bygging/Matestasjoner#Overharmoniske og dynamiske fenomener.